On a warm October morning I enter Dr. Smith’s chiropractic practice in the Ironworks building on El Molino. I need an adjustment (as usual), but I also need to interview him for some upcoming Facebook posts.

Dr. Smith greets me with a smile and introduces me to another patient waiting, “She’s 92 and she walked here!”

“I have to walk back, too,” the spry, small framed woman quips.

“Amazing,” Dr. Smith says.  “You give us all goals. We keep moving and we could all be like you. Thanks for being an inspiration!” Dr. Smith leads her away for her adjustment and I can still feel his child-like enthusiasm dancing in the room.

“We started the Pacers 20 years ago and look at it now,” he tells me with a mix of wonder and awe as we settle into his office. “Way back in 1996 I just wanted to find a place for my patients to exercise without having to spend a ton of money. I thought, ‘What do I know? What can I do? I run and bike. Well, maybe I’ll just invite folks down to the Rose Bowl and they can run with me.’”

For several months Dr. Smith and his wife and Pacer co-founder, Robin, mailed letters to their client database (“Imagine that!” he says as an aside), put flyers wherever they could, and found ways to talk up the idea of a running club in the community. Then, on a Sunday morning in May 1996, 40 people showed up to begin running. Most had never run before, so Dr. Smith created the foundation of what is now the Pre-Conditioner program and the 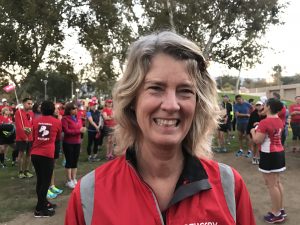 Forging on for the coming months, using phone trees to coordinate runs, 12 Pacers opted to run the Los Angeles Marathon.

“They were all marathon newbies,” says Robin. “Man, it’s always amazing to see someone run their first marathon. It’s just so emotional.”

“I ran more than a marathon that day,” tells Dr. Smith. “I waited at the 20-mile mark for some runners that had fallen behind. Then I’d run with them for a bit, send them off toward the finish line, and head back for another runner until they were all in. It was amazing,” he says with a large grin on his face.

As he tells me all 12 Pacers completed the marathon that year he reaches for a photo album, “Remember these? This was what we did with photos before we had Facebook!”

He flips through until he lands on a picture of a rainbow. “This is what we saw on the way home from the first marathon.” 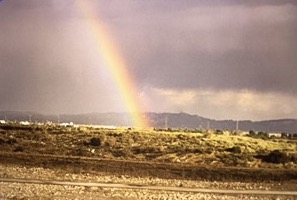 While on a run with Robin later that week she tells me, “Steve saw this rainbow and I was saying ‘How? There’s no rain!” And Steve asked me to take a photo, even though I told him it wouldn’t show up on film. When we got the pictures back, we saw the rainbow. The moment was real.”

“That was it for me,” says Dr. Smith, “It was when I realized this is more than a physical training program; this is an emotional, spiritual experience. It’s when I knew my calling in life was to build the Pacers and make sure that every community could have access to what we’ve discovered.”

“The secret sauce of the Pacers was a realization for that day. It’s more about the community and less about the training for us. And people need that. When you’re running, it dissolves barriers—the things that separate us. It’s just you, the road, and the runner next to you. We’ve said since then that every day is a gift.  It’s a great day to go unwrap that gift and go for a run.”

The Pacers continue in the spirit and tradition started by Dr. Smith, Robin, and those original Pacers. We aim to bring fun, friendly running support and training to anyone and everyone completely free of charge.

Today we have more than 300 active runners and eight training programs from beginner to ultra-runner in the Pasadena Pacers alone, but our work is not done.  While we continue to grow the Pasadena Pacers, we are excited to start developing the Pacer Nation, with four additional clubs currently in the US and abroad. More will hopefully soon follow.

As Dr. Smith passionately pleads: “We can impact communities. We can impact a nation, the entire world. We can raise the spirits of human kind. It sounds lofty, but that’s what we’re trying to do.”

We hope to see you on your next run, Pacer.