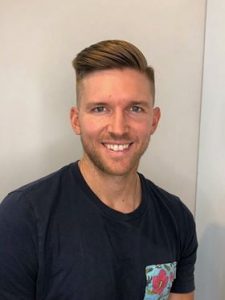 Dustin grew up in  La Crescenta, CA a small town in the foothills overlooking Glendale, Los Angeles, and sometimes even the ocean. He played numerous sports growing up and fell in love with baseball at a young age.  While participating in school sports he honed his skills on the baseball field and became a collegiate player at UC Riverside.  He was then later Drafted by the New York Mets and began his Professional Baseball career.

During Dustin’s baseball career he ran into health issues that affected his physical, mental, emotional and spiritual health. Concerned for his well-being, Dustin ended up getting a number of tests and procedures  in order to better understand what was causing his health problems. After an upper GI and colonoscopy, and many other methods of diagnosis, he was still left clueless as to what was causing his poor well-being. But then after a GREEN SMOOTHIE and a 5:30 am yoga class he felt more energized and balanced than he had in years.

After earning his BA and pursuing a professional baseball career, currently he has  became a certified Holistic Lifestyle Coach and CHEK Exercise Coach through the Chek Institute. He has also furthered his Nutrition Coaching  Career by becoming a Level 2 Masters graduate of the well known world leader in online nutrition, health and fitness coaching company Precision Nutrition. His Nutrition coaching is done remotely or in person through PN ProCoach software  for WOMEN and MEN.

He has seen, over and over, how crucial the physical, mental, emotional and spiritual health of the person/athlete is to their overall performance, health and body composition. As a former professional athlete he knows the rigors and stress that are placed on the body and mind and if left untreated, can lead to  disaster.

For Dustin, teaching RAINE (Regular Athletes Into Next Endeavor) athletes how vital injury prevention and recovery is for their overall performance, health, and wellness is a dream come true and his classes are infused with his enthusiasm.

Dustin teaches that maintaining physical exertion while focusing the mind leads to improved proprioception (body awareness). His classes leave his athletes and clients feeling stronger, more flexible, and educated on how JOGA and other exercise topics discussed benefit and strengthen their bodies and minds. His Current Classes are located at 168 fitness 360 Elite Performance sports in La Crescenta, CA. He is available for online and remote contracts extending beyond these areas.

For further information please go to dustintraines.com or email him at demmons34@gmail.com.