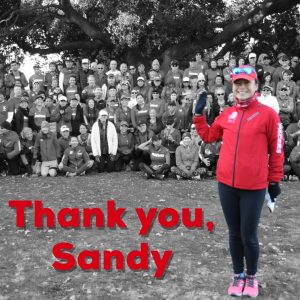 This month, we crossed the finish line of a very long endurance event. Unlike many endurance events—with medals and cheering spectators—this one went by, barely noticed. It was one of those victories forged of gritty determinism and raw effort.

There have been a many outstanding people who have made great sacrifices to our club, with the toughest role being the President. Sandy Liu has shouldered that burden for the last two years. Most Presidents last a year before burnout sets in. Sandy was unsinkable, leading for two years as President, and a year before that as Vice President.

She wakes up early nearly Saturday, fills in all the information on the signs, then loads them into the back of her car along with the Green Can, yard signs, safety signs, and all the unclaimed items our runners leave behind. Every Saturday she has announcements, daunting trying to speak over the enthusiastic chattering of friends for anyone, let alone an introvert like our Sandy. Questions about the Pacers never end, especially if you are about to start a run or are absorbed in an important conversation. You can never just leave on your run when you’re the President, something is left to do or someone has a “quick question.” Monday rolls onto your calendar with leadership meetings loaded with 20 or more action items to be planned and executed. The meeting starts late in the evening and she leaves hours later with a long to-do list. The emails never end. Thoughts about the Pacers invade your consciousness at odd times. You are never at rest. Stress.

That said, being the President is a job that comes with high wages. People’s lives are filled with friendship and accomplishment because of you, Sandy. High wages indeed. Standing at the start line of the LA Marathon immersed in soaring spirits is a win I hope you take personally. Being at the 20 Mile Cheer Station, basking in victories, hearing a new runner tell you their how their life has been changed, that’s your reward. Cheering in a freezing sideways rainstorm at the Boston Marathon is humbling when you know, that for some, it took years of work for the honor to run there. When you see Pacers sharing a bagel, filling hydration packs at the water stations, having a beer at the Pacer Chasers, or a tired, sweaty runner hug friends and the end of a workout, you should know you caused all these things, Sandy.

I can’t say how many hours Sandy spent working on the Pacers or how many hours occupied her mind, but I do know that for the last three years, thoughts of the Pacers and the work to be done was never more than a moment away.

With a heart full of love and a head full of work, she propelled us into the future we are now occupy. With this in mind, please come show her your gratitude at the Victory Party on July 22.