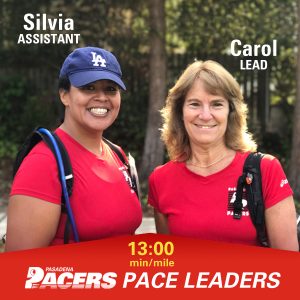 How long have you been with the Pasadena Pacers? I started as a Pre-Conditioner in September 2013.

How many marathons have you run? Five—my first marathon was LAM in February 2016. I’ve run four more since then.

Why do you run? I started to run a year after we moved from New Jersey to California because I wanted to be more social and to meet more people—I didn’t think that I’d ever become a “runner.”  Well, in addition to finding the Pacers and making a lot of new friends, I actually realized that I could run and that I liked to run. I trained for half marathons and then continued onto running marathons because I love the feeling of accomplishment.  I also enjoy running with and encouraging others like me (not the fastest runner) to keep running and never give up.

Favorite post-run snack/meal? After a long run, I like to have protein. I eat cheese or drink chocolate low-fat Muscle Milk (20 grams of protein with only 100 calories). I even proudly brought Muscle Milks to an after-Marathon party, despite the laughs it got.

Running mantra: I’m not very original—“you can do it!” Or, I think about running for those who can’t run.

What do you do for fun? Hang out (mostly with other runners), explore new places and things in the Pasadena/SoCal area (e.g., restaurants, hikes, shopping, museums, historical sites/architecture) and travel.

Do you have a secret talent? I can throw pizza dough into the air.

Anything else you’d like your fellow Pacers to know? Running faster and/or further takes time and effort—it’s not easy, otherwise everyone would be doing it. Kara Goucher, world-class distance runner says, “Don’t try to rush progress. Remember—a step forward, no matter how small, is a step in the right direction. Keep believing.”  And a favorite expression of mine is “a 13-minute mile is the same distance as an eight-minute mile.”

How long have you been with the Pasadena Pacers? Probably since 2012…don’t remember. (So about five years.) I met friendly Pasadena Pacers during the Griffith Park Half Marathon that convinced me to just show up the following Saturday for LA Marathon training.

How many marathons have you run? About 18.

Why do you run? I run because it’s a stress reliever, I like to run with others, and I need to keep my body moving.

Favorite post-run snack/meal? After long Saturday runs: breakfast. After marathons, a margarita and something I usually don’t eat, like a burger.

Running mantra: I have a few; during my first marathon it was, “I think I can.”

Occupation: Currently, I am an assistant principal. My goal is to be an elementary school principal in LAUSD.

What do you do for fun? During the summer I like to hang out on the lake in Lake Havasu with my family. Fun to me means being with my family and friends, just hanging out.

Do you have a secret talent? I know how to keep a secret, that’s my talent.

Anything else you’d like your fellow Pacers to know? Training for a marathon is all about delayed gratification.