His passion for running—and people who run—is enormous. Edgar, an RRCA-certified coach, cares deeply for the health, safety, and wellness of all his runners. Maybe you’ve talked with him about speed work or how to stay injury free (and if you haven’t, you should), but here’s a chance to get to know a bit more about Edgar. Read on for some stories and a bunch of inspiration—basically Edgar in a nutshell. 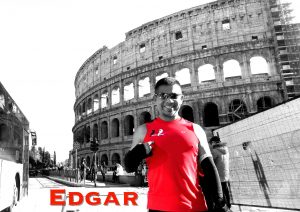 How long have you been running with the Pasadena Pacers?
It’ll be seven years at the end of 2017.

Why did you join our amazing club?
For years, I drove to Santa Monica until one day I decided to look for a local club. I searched online, found the Pacers but had no luck finding the group. On my third visit, I found the group, stayed, and fell in love with the bagels—okay, the runners too.

Tell us how you got started as the Marathon Coach.
The universe conspired. I’d been off running for almost 10 years. A car hit me while on my bike and the fear kept me from running and cycling. The Pacers gave me a safe space. So safe, in fact, Andrew Fan (a Pacer) and I started the 20-Mile Challenge (TMC) group to break the 1:40 half marathon. Within a year, several runners had inched closer to a 1:30 half. Today, a few TMCers run a sub-1:25 half.

Anyway, the Pacers’ marathon coach at the time was an inspiring force that made the club unique. Hard to imagine that anyone could fill her shoes. But she wanted to venture into the ultramarathon space and was sure TMC had prepped me for this role. It took many months and a few beers to convince me. It’s been three years and while it hasn’t gotten easier, I absolutely love sharing the gift of the marathon with others. Love it!

Why do you stay in the Pacers (besides being a coach)?
It’s one thing to run. It’s another to have friends who understand why you can’t drink a beer or two on a Thursday evening. I find that people who run are also aspirational. I appreciate being pushed to be a better me.

Tell us about an amazing Pacer memory.
About three years ago I decided to chase a Boston marathon qualifying time. I began to chip away at my well established benchmark of 3:40. Then one day I broke 3:30. Then 3:25. Unfortunately, I need something better than a 3:22. I finally hit 3:22, but now I was aiming for a 3:20. This number was special because 320 was my grandmother’s address when I was a little kid. She raised me for a several years, and getting a 3:20 felt like a good way to honor her. In the summer of 2016, after 25 miles at a solid pace, I was inching closer to my target time. I went through the finish line thinking about my grandma and my family. I broke down and cried for a bit. It was marathon 20-something, but it felt like a new experience to me. Priceless!

You didn’t ask, but here’s a second amazing memory: I ran from the City of Marathon to Athens for the 2,502 anniversary of the original marathon. That was pretty special, but while celebrating after the run, someone said that Istanbul was having a marathon the following week. I booked my flight that night and seven days later ran from Asia into Europe in a country where not many speak English—or another language I understand. And yet, I was treated like family. I was invited to eat at several homes (minus my stinky shoes), but I shared my love of running with strangers. It was unforgettable. Running brings people together, and I like being in the middle of those experiences.

What do you think is the best thing about the Pacers?
Our marathon program, of course! Actually, the absolute best thing about the group is not running. It’s the fact that people, from all walks of life, with varying life experiences, cultural and racial differences can come together and share a common love. It’s special. We have one of the most diverse groups I’ve ever been a part of.

Tell the folks why they should do marathon.
A 5K is a race. A half marathon is a challenge. But a marathon is a transformational experience. It will make you question your sanity, for sure. It will dish out some pain and make you curse a little (or a lot). But when it’s done, all the doubts and pains won’t matter because you’ve crossed the finish line as a new version of yourself.

Do you have any secret talents?
For five years I played competitive table-tennis. In year four, I won first place.

Tell us something we don’t know about you.
As a teenager I was a break dancer. Twice I made some side money in a corner in Hollywood (as a dancer…don’t want start rumors). I still love a good beat.

What do you do when you’re not running/working?
I’d like to say that travel is my great passion (outside running), but that requires resources. If not working or running, I’m probably doing something that relates to travel.